The Smith Allure is a women’s specific helmet new for the 2010-2011 ski and ride season. The Allure is the lightest helmet on the market, weighing a mere 11. 5 ounces. Now that is 6-8 ounces lighter than your average helmet. Last year, I sported the Variant Brim, also by Smith and when I put the Allure on I was wowed by how light it felt on my head.

Don’t be fooled by the Allure’s weight; decreasing weight does not mean that you have to sacrifice features or protection. The Allure has 9 vents, which is less than other helmets on the market, yet the vents are placed in key areas, such as at the front of the helmet. These two vents work to bring cool air in from the top and funnels the air down towards your goggles to prevent you from getting pesky goggle fog. The Allure works extremely well with the Smith I/OS, which will be reviewed later on. When wearing non-Smith goggles, such as a pair of Bolle’s that I have also been testing (featured in the photo below), I sometimes get a smidgen of a gaper gap. My friends say they can’t see it, but I can feel it a touch. This is not a deal breaker because on warmish days or even on cooler days because throwing on a thin beanie can help address this centimeter wide problem. The other 3 goggles I have been testing have matched up much better with the contour of the Allure.

Even with the temps have hovering around the single digits at the mountain base, I have not felt the need to throw on a beanie underneath. This is because the Allure features super cozy and soft ear flaps and a removable (and washable) fleece tricot lining that keeps your noggin plenty warm. The ear flaps have a zippered compartment that allows you to slip in headphones for your on mountain music enjoyment. You no longer have to shell out for a large clunky helmet so that you can play some tunes.

The Allure comes in 3 different sizes and is not adjustable like some of its’ counterparts. I have been testing a medium, which fits 56-58 cm heads and have had no complaints. You can’t get the precise fit that some other higher priced helmets offer, however the size ranges are a bit more precise to make up for it. The Allure is a good bargain as well, coming in with a MSRP of $100 and can be found for slightly less on a few wholesaler websites. The Allure is available in 5 colors: black, white, bronze, aqua, slate w/pink and is worth a look if you are in the market for a helmet that won’t weigh or slow you down. 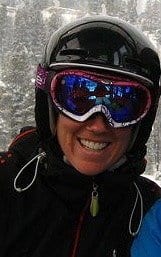 Features of the Smith Allure Helmet

For more info on the Allure Helmet and other Smith products, visit www.smithoptics.com.