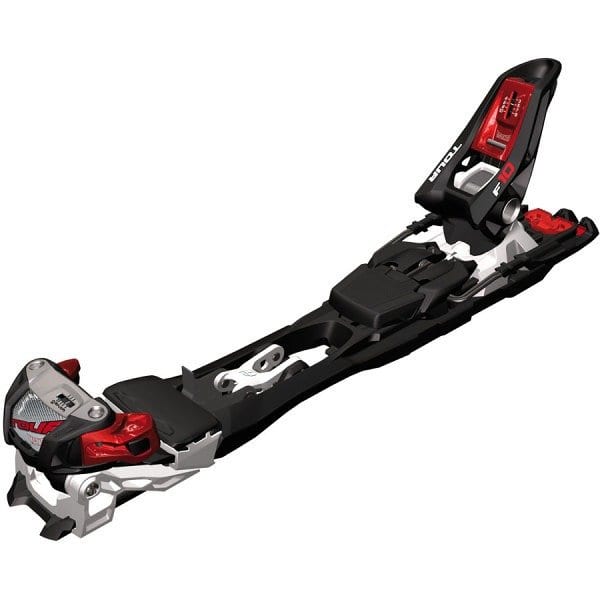 The Marker Tour F10 is a solid binding that gives you the confidence and performance on the downhill that you expect from a Marker binding, in a lighter weight option than its’ other AT offerings.  When it comes to choosing an AT setup, you need to think about what your expectations for skiing will be on the ski/binding. Do you plan to use this as your one ski set up? Do you plan to use this primarily at the resort, but would like the option for some occasional side country or uphill laps? Or do you want a binding for long tours to less traveled places? What you want out of a binding will help you to decide what kind of set up you should lean towards: an ultra-light tech binding to go farther and faster vs a binding such as the Marker Tour F10, that can take you confidently into the backcountry, with a bit more weight, and handle whatever snow condition you throw it into.

Personally, testing out the Marker Tour F10 has been a lot of fun. I have used the binding with my alpine and backcountry boots, taken it into the backcountry, side-country, and at the resort. No matter the conditions, I have found that the binding has gotten me there seamlessly and not faltered on the downhill.

Touring with the Marker Tour F10

While they are not the lightest on the market, I wasn’t bothered by the added weight when paired with my Dynafit boots and lighter K2 skis. I comfortably toured on these bindings for all day effort due to Marker’s incorporation of Hollow Tech, a fiber-reinforced frame that as its’ name suggests, is hollow with gas-injected construction. This technology is what makes the F10 lighter than other bindings within Marker’s line-up. 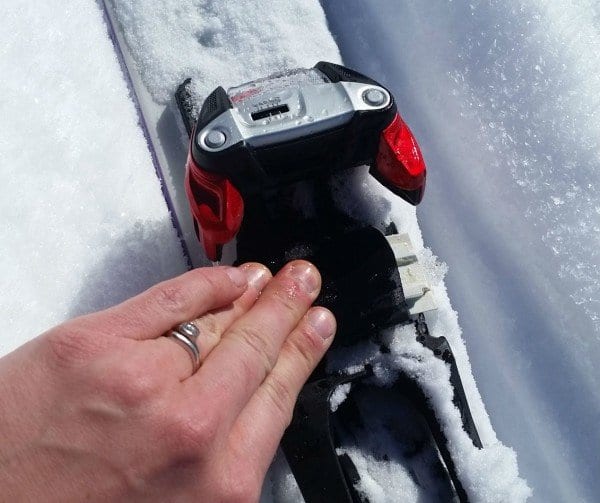 The photo above demonstrates the moveable stainless steel AFD (anti-friction device). The AFD is also height adjustable and accommodates most alpine and AT boots. I have used these bindings with my K2 and Lange alpine boots, as well as my Dynafits. They share the same boot sole length and required only minor tweaking when swapping in between. Comparing the snow buildup on these bindings to my alpine bindings isn’t really fair, as they do an incredible job at preventing build up of snow, ice, or muck thanks to teflon coating at the AFD, pivot plate, and toe region. This feature makes transitioning and getting in and out of your binding a cinch.

In order to transition from downhill to tour mode, simply click out of your binding and locate the lever arm under the middle of the binding and slide the lever arm towards the back of the ski. The entire platform then slides back 4cm; this transition aids with balance on flat and steep terrain. Presto, your heel is now free for a second lap.

Climbing with the Marker Tour F10 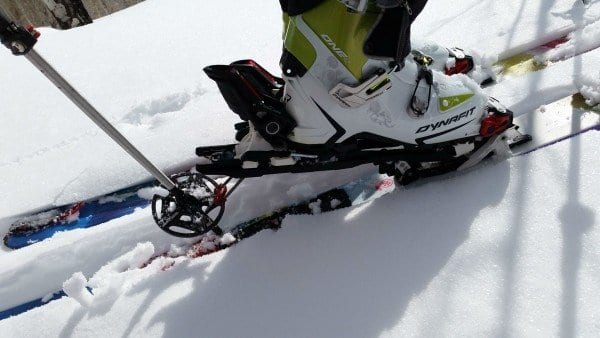 Transitioning from touring on flat ground to a mild or steep slope is super easy with the Marker Tour F10 bindings. With just a flick of a ski pole, you can transition to either 7 degrees or 13 degrees. 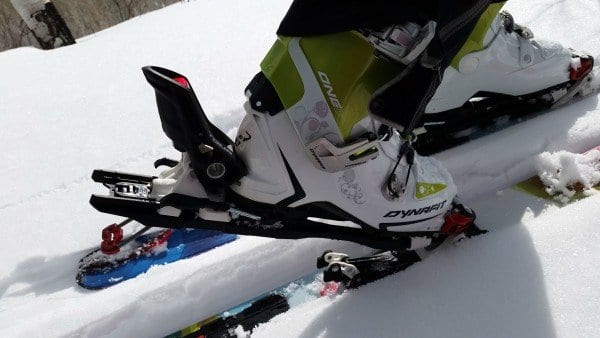 The climbing aid or riser bar platform is red, which makes it easy to find when snow gets caked to your skis and bindings. Another bonus, Marker has incorporated an elastomer padding on the climbing aids, which helps to keep your feet quite when utilizing the climbing aids. For those that have never heard the constant clacking sound of a binding without the padding, be forewarned, it get’s annoying quite quickly. 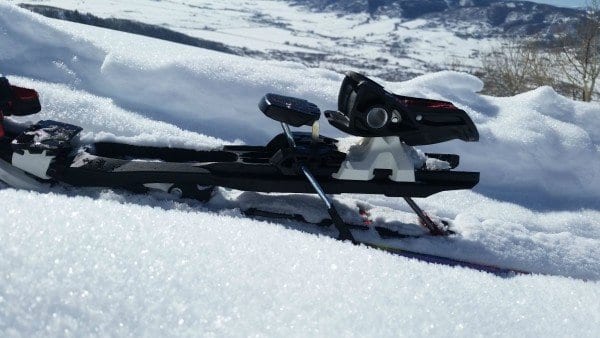 When the slope becomes steeper, it is easy to transition quickly to 13 degrees by pushing your pole down all the way on the red platform until it clicks into place. If you find yourself in even steeper terrain, Marker also makes crampons that are compatible for both the Marker Tour F10 and its’ beefier cousin, the Tour F12. The crampons are available in 3 widths: 92 mm, 133 mm, and 128 mm. For and additional $79, you can add a variety of terrain and conditions you are able to tackle with your Marker Tour F10s. Touring around Steamboat doesn’t call for crampons very often, due to the more mild angled slopes, therefore I have yet to pair the crampons with my bindings. 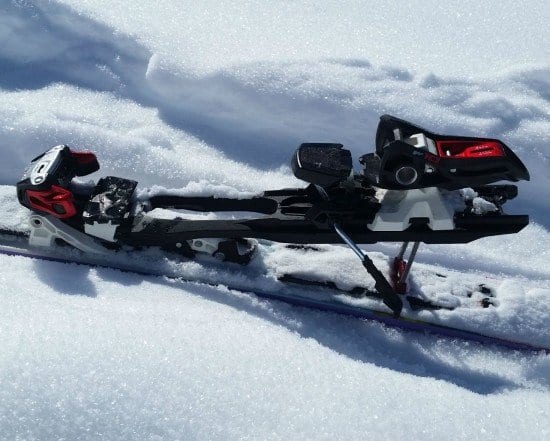 Transition from Tour to Downhill

The hard work is done, now it is time to transition to downhill. Unlike other set ups, utilizing the Marker Tour F10 means that you do have to take off your ski to transition from uphill to downhill. With a little practice, you can get pretty quick at it and it isn’t really a con after all because the downhill security is worth the extra few seconds. Do the usual steps, strip off your skins and stash away, then simply hold the back part of the binding with one hand and pull the loop with the other to move the binding forwards and into position. I found that the transition from tour to downhill was easy in light fluffy snow. However, with the wet snow and mild winter in Steamboat, we have been having more spring-like conditions. In the wet snow, the transition takes a bit more time as the snow tends to accumulate and prevent the safe transition to downhill/locked mode. This is a problem that happens with pretty much any ski binding with this design. Marker has worked to improve this area and when skiing with folks with the older Marker Tour F10 model, I found I had less snow/ice. 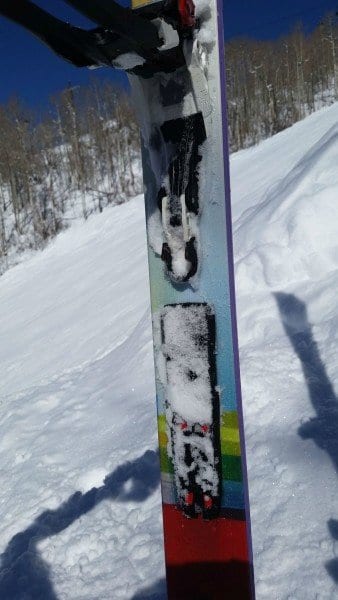 Ice and snow accumulated on a skin up the resort; a few seconds of de-icing with the ski pole frees up the black loop and white lever.

If the binding doesn’t move easily with one hand on the loop, then something is stuck underneath and you should back up a step to clean out the track. Before stepping into the binding, I always check to make sure that there are no gaps and the binding is lined and locked down. 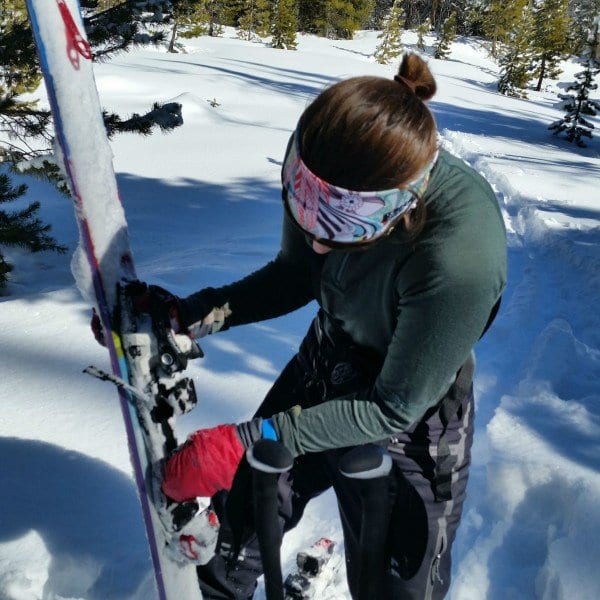 Locking the Marker Tour F10 into downhill mode, a two handed job for most.

The Marker Tour F10 features a DIN range of 3-10 and is designed for skiers that weigh up to 230 lbs. If you are on the higher end of the DIN range, like to huck yourself off things, or on the higher weight range, I recommend checking out one of Marker’s beefier AT bindings. At 5’9″ and 135 lbs, I found this binding to be ideal with my typical DIN of 8. The binding is responsive and solid thanks to a stiff Touring Base Plate and Marker’s utilization of a 76mm platform. The wider platform allows you to put the Marker Tour F10 on wider skis with confidence, as it allows you to create more power transmission across a larger surface area, aptly termed Power Width Design by Marker. In deep, heavy snow, I never felt that I lacked control to power through each turn.

The Marker Tour F10 AT bindings retail for $399 and come with a brake, unlike many AT bindings. Here are the nitty-gritty details/specs.

Overall, the Marker Tour F10 have been a great addition and ideal for not only experienced skiers, but those seeking to get into the backcountry with versatility and performance. 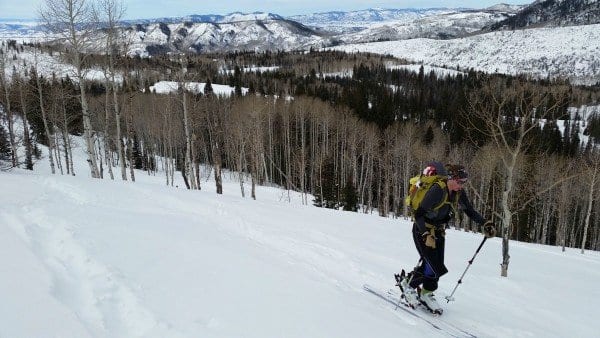