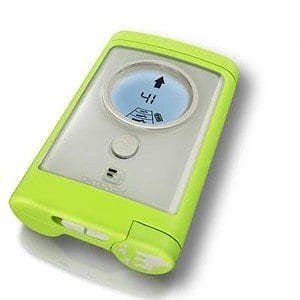 The Ortovox 3+ is an avalanche transceiver with smart antenna technology.  This means that it uses intelligent position recognition to automatically find the best transmission antenna for where you are. The Ortovox 3+ is small, fairly lightweight, and sleek.

When I initially took the beacon out of the box I had a bit of challenge just figuring out how to turn it on. The power switch is located on the bottom of the beacon where the battery is inserted. There are three small icons on the bottom of the beacon to indicate what mode it is in – a circle, a solid line, and a battery which could be easily confused with the solid line. In order to turn the 3+ on, you need to slide a switch while simultaneously turning the knob to the correct position. I found this a bit cumbersome and even more of a problem when I accidentally turned the knob a bit too far and the battery came out. 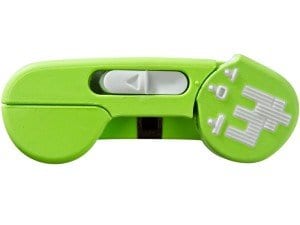 After my initial struggle with the power knob, I decided to read the instruction manual before proceeding. ***When dealing with a life-saving device, reading the owner’s manual thoroughly is important.*** I found that the English version of the directions were not well written, making them difficult to follow and understand. I spent about an hour familiarizing myself with the 3+ before I took it out into the field. I became very comfortable with the functionality, switching between search and transmit mode, the display, and the flagging capabilities for multiple burials. I tested the beacon in multiple situations on separate days.

Day 1 – Backcountry
On the first backcountry outing with the Ortovox 3+, an extra Unnamed beacon was used to stage a search. I searched for one beacon with the Ortovox 3+ and was able to quickly and easily locate the buried beacon. During ‘coarse search’, the directional arrow, distance indicators, and audio indicators were accurate and easy to follow. During ‘fine search’, the distance was again extremely accurate, and the audio cadence sped up and changed tone as I approached, allowing me to locate the beacon quickly and efficiently.

Day 2 – Search Scenarios – I conducted several tests in an open area at a ski resort:

Similar to the Day 1 test of the Ortovox 3+, one Unnamed beacon was buried, and I searched using the Ortovox 3+.  I picked up a signal, but not until approximately 25 meters away, which was later than I expected to pick up a signal.  I was able to quickly follow the visual display to the transceiver, and locate the buried beacon.

With two Unnamed beacons buried, I began scanning the area with the Ortovox 3+,  walking in large,methodical zigzags. Again, I picked up a signal about 25 meters away and began to follow it. I followed the directional arrows and was able to quickly complete the ‘coarse search’ to locate the first beacon. I did not pick up a second signal at that time. I flagged the first beacon, and moved on to searching for the second. As I began scanning again, the Ortovox 3+ picked up a signal, but both the visual and audio indicators became sporadic and confusing. The arrows would bounce quickly from side to side, I would get a distance with no direction or sound, get an arrow but no distance, the distances that I did get bounced erratically between extremely low reading and extremely high readings. After several frustrating minutes of doubling back on my own tracks, I was able to hold a signal that led me to the beacon. At one point, I was within 2 meters of the buried beacon, and the Ortovox 3+ neither made a sound, nor did not have a distance or direction on the display.  This search panicked me, as I was imagining a real, life-or-death usage situation.

After the unsuccessful multi-beacon search, I opted to revert back to searching for a single buried beacon using the Ortovox 3+. I again found myself in a frustrating situation. After initially picking up a signal and beginning to follow it, I was given random, sporadic readings, and inconsistent distances, directions, and audio cues.  What began as a methodical search turned into more trial-and-error, and I was finally able to locate the buried beacon and recover it.

As an experiment, rather than searching with the Ortovox 3+ again, I decided to bury the Ortovox 3+ transmitter, and search with another Unnamed beacon to test out the “smart transmission technology.” The Unnamed search beacon picked up a signal at a little over 30 meters, and was able to hone in on the buried Ortovox 3+ quickly and accurately. It is difficult to test, but in theory the “smart transmission” technology would prevent the beacon from sending its primary transmission skyward and would instead redirect the transmission to a more horizontally oriented antenna, resulting in a quicker signal. I have no reason to believe that any of the inconsistencies I saw in searching with the Ortovox 3+ carry over to its signal transmitting capability if buried.

Overall, I found the Ortovox 3+ to be less intuitive than other avalanche transceivers I have used, which, to be honest, is not a major problem because you should be extremely familiar with a beacon before ever using it in the backcountry. My primary concern with the product was the inconsistency in the quality of the search. Having tested it several times, and sometimes having no trouble at all, I have ruled out user error.

The Ortovox 3+, when working properly, does have some nice features – the display is large, clear, easy to view and understand.  The back-lighting on the display could prove to be a huge help in a night or low light search, and the antenna technology is definitely a benefit for quicker discovery / recovery.

For more info on the 3+ Avalanche Transceiver and other Ortovox products, visit www.rei.com.