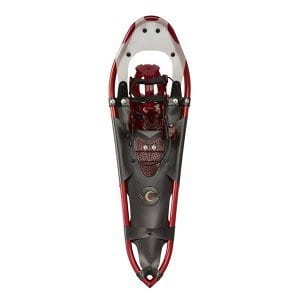 Whether you are heading into the backcountry of the Rocky Mountains or snowshoeing on a groomed trail, it is important to find a snowshoe that fits your style of snowshoeing and that you can depend on.  With the gaining popularity of the activity, more and more snowshoe companies are starting to enter the market.  I recently had the chance to test out the Crescent Moon snowshoe line which has been in the snowshoe industry for many years, in specific I tested the Gold Series 10. 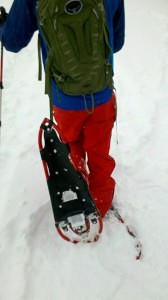 The Crescent Moon Gold 10 Series is labeled as the backcountry series meaning it should be able to handle deep powder stashes as well as grip on to rock and other objectives as you sometimes find yourself in dicey situations in the backcountry.  Coming standard with many well made snowshoes is a durable plastic decking on the snowshoe which helps keep the snowshoe on top of the snow versus sinking in or post holing.  And while many companies like to tout they have a super durable plastic that is second to none, we found the plastic used on the Crescent Moon Gold Series 10 to be consistant with other high end companies. 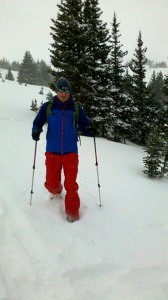 The binding of the Gold 10 series is a little different than other snowshoes I have tested in the past.  Sliding your foot in and out of the shoe seemed to be pretty easy with pretty much all boot sizes.  I wear a size 12.5 shoe and it fit that size with no problem.  I also tested my ski boot for sh#ts and giggles and much to my surprise, it fit that too!  To keep your toes from sliding too far forward in the snowshoe, there is a two pronged piece of plastic that prevents the foot from sliding too far forward.  I haven’t run into this problem in most snowshoes, but if you are in a tricky situation, it is nice to know your foot will stay in place.  The Gold Series 10 seemed to do a pretty good job at giving me a snug and secure fit.  The material used to cinch the bootie is a rubber material that is pretty easy to work with.  To secure the back of the foot in the shoeshoe, Crescent Moon uses a rachating system to give you a secure fit.  When I first tested the snowshoes, I found them to be difficult to take off but after figiting around with the snowshoes, I was able to take off the snowshoes with ease. 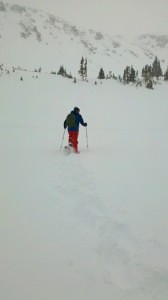 As for the crampon of the snowshoe, I feel there is room for improvement.  The toe of the snowshoe has 2 pronges that do the job for the most part, but I like other snowshoe company models where there are metal spikes rounding out the forefoot.  If you end up on an angle, there are two small spikes on each side to give you added stability, but once again, I would prefer something a little more significant.  I have also found one of the spikes to move out of place on the plastic deck as well.

One of my biggest complaints on this series of snowshoes is the width of the snowshoe near the toe area.  I found that the width measures 3/4 of an inch wider than comparative snowshoes, in specific, Atlas 1030’s. I found this to be very cumbersome as I walked and it made me feel completely imbalanced.  When talking to Crescent Moon, they say they are the same width as comparative models, but I have to disagree.  I also found these snowshoes tended to turn sideways pretty easy while walking, this may or may not have been assisted by the added width.

The retail price of the Crescent Moon Gold Series 10 is $269 which is on par with other snowshoes on the market.  If you want to give these snowshoes a try, I suggested heading to a local outdoors store where you can demo a pair.  If you can’t demo a pair, I suggest finding a place with a good return policy like REI so in case you don’t like the fit/ride, you can return them with no problem.  If by chance you have used these snowshoes, we would love to hear your feedback.  No companies representatives please. 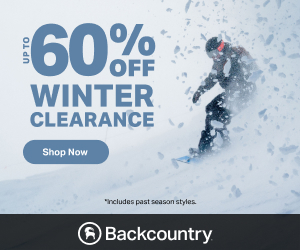