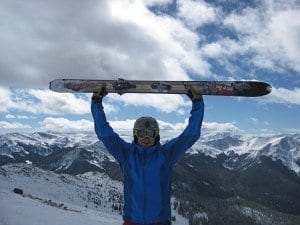 As backcountry and sidecountry skiing is gaining in popularity, it has many skiers thinking about switching or upgrading their bindings and ski setup. I recently had the chance to test out a Dynafit setup that included; STOKE ski’s, skin’s, ZZERO4 C TF Boots, and TLT Vertical ST bindings.

I only tested this setup for a weekend which is a little shorter than I typically test out products, but I feel that I was able to get a pretty good idea of the Dynafit setup.  To start out the weekend, our group went to Arapahoe Basin where we primarily skied crud as the earlier days didn’t make for the best snow conditions.  For you east coasters, you might call this powder.  Throughout the day, I tried to test out the equipment in all conditions.  I skied steep icy slopes where I would love to say the ski’s performed well, but I have to admit I had a tough time catching a grip.  Outside of the ski’s not catching, everything else functioned properly.  Next, I hiked up to the Zuma Cornice to see how the bindings handled drop-ins.  Here, I was a little nervous as I wasn’t sure with the little about of metal used in the bindings whether they would hold me in or not.  The answer, they performed awesome!  While skiing down the slope, I encountered chopped up powder and with 108 underfoot in the STOKE ski’s, I stayed afloat on top of the snow and found the ski’s to performed amazing in powder conditions. 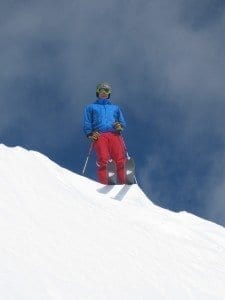 Dropping in at A-Basin

Although I am not a park rat, I do like to hit the park here and their to check out my skills.  Aside from my actual skill level, I found the bindings to perform just fine.  Now I probably wouldn’t use a Dynafit binding if I were playing in the park all the time, but it is good to know they can handle park demands from time to time. 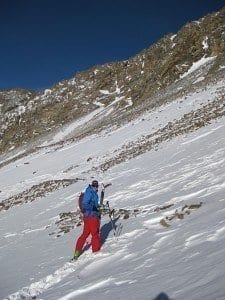 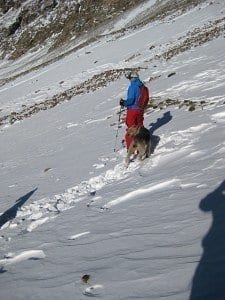 After skiing A-Basin non-stop for about 4 hours, we then headed over to the winter parking lot for Grays and Torrey’s Peak.  After getting our packs situated, we skied up approximately 3 miles with an elevation gain of 1500 ft. to our cabin.  The trail was snowpacked and there wasn’t much powder on the trail.  Off trail, there was about 4 feet of powder.  After about 2.5 miles of skinning up the trail, I went off trail.  This is where some problems started for me.  I went to make a turn and my ski came out of the binding.  With a 40 lb pack on me, I quickly toppled over and sank into the snow.  Getting back into the binding was a little challenging given that I was a beginner at the setup.  And after this first binding tweak, I ended up having problems when using the bindings on uphill adventures.  I am going to chalk it up to it being my first time and there is a learning curve, but it was sure frustrating at times.  Downhill, I had no challenge.  The other skier in my group, Shannon had no problem with her setup the whole weekend, she had used the Dynafit binding setup before.

Stoke:  The Stoke was a super fun ski to ski in both backcountry and the resorts.  Compared to a standard alpine ski and setup, the Stoke was super light. The core is made of Isocore Paulownia Ultralight wood with stringers in beech and bamboo.  I skied the 191’s which were a tad long for me, but overall, I really enjoyed the ride this ski offered. 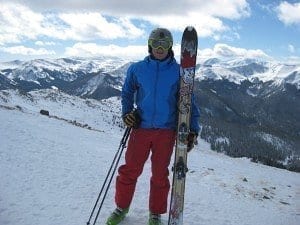 Boot- ZZERO4 C TF: First, Dynafit needs to come up with a new name for this boot, way to complicated!  Outside the name, I enjoyed this boot.  I found the fit to have a snug fit around the shin and foot versus other touring boots I have tried in the past.  The ZZERO4 provided me plenty of stability while pushing my limits at A-Basin and felt super lightweight while touring uphill.

Bindings: TLT Vertical ST:  Given this was my first time trying out the Dynafit Bindings, I was impressed overall.  The weight difference was very enjoyable for both uphill touring and alpine skiing.  There was definitely a learning curve to the binding setup which I didn’t enjoy at times, but after talking with people that have skied the Dynafit setup before, it sounds like it just takes a few times to really get tuned in.

When all is said and done, I really enjoyed skiing the Dynafit setup and I definitely think it is worth taking a look at the next time you make a purchase. For more information on Dynafit, please visit www.backcountry.com.