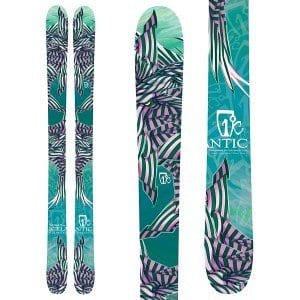 Icelantic describes the Nomad RKR as “the funnest ski we’ve ever made.” I’m lucky enough to get to ski 75+ days per year and get to do so on many different skis and don’t want to jinx things by declaring one pair to be the most fun. How about this for a summary?

The shape and design make everything easier. Conditions were great and I skied all types of terrain except for: park, big air and east-coast ice.  Let’s start with weeks old crud. But first, you the reader should consider the source.  My style is best described as the opposite of “butter.” I don’t “bounce down the mountain” or “smear my turns.” Call me old-school, but I love to carve.  Turns and lots of them, that’s how I get down the mountain. I don’t ski backwards and only go straight-line on fresh days when I’m boot deep. At least, I didn’t ski switch or ski straight down an off-piste line until I get on these skis.  Wow, they fly effortlessly over anything. 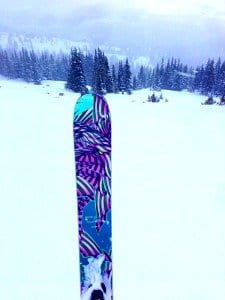 When Arapahoe Basin Ski Patrol dropped the ropes on Montezuma Bowl for the first time of the season, I charged down the hill in 40mph winds with zero visibility and hoped the Nomad RKR’s would deliver. Skiing aggressively and initiating the turn drove the tip through the crud with zero chatter. When the wind-blown crust gave way to fluffy blower snow, the ski popped on top of the fresh snow and surfed effortlessly until conditions changed again and they smashed through the crust and cut through the choppy stuff like a burly all-mountain ski should.  After a few runs, I headed to the front side for a groomer.  Lay them on edge and forget they’re 105 underfoot. They can cut trenches on corduroy.

If you want to, they will transition from turn to turn like lighting, thanks to the sidecut.  Suddenly, I dropped over a catwalk into bumps while going fast. There was six inches of soft snow on the bumps and the skis transitioned from edge to edge so quickly. Evidently, they do bumps too.  They skied like a traditional ski in the moguls, but what the heck… could they bounce over the bumps and charge down them, absorbing the impact while staying stable?  Yes, yes they can.  Point them and go. The skis are soft enough to be very forgiving, but stiff enough to go really fast and hold an edge under challenging conditions.

Day Three: There was a foot of fresh in the Rocky Mountains and I was the first one to drop into the Bowl. The next five runs were very fast, very fresh and very fun. The rocker makes it so easy to surf the snow.  When your legs are burning, let the skis do the work for you. They’ll stay afloat so you don’t have to sit back and stress your quadriceps.  These skis love the deep stuff, but they also perform in bad conditions. When it came time to cross a wind-blown section over knee-chattering frozen crud, the rocker and the shovel design make for a ski that seems to navigate on its own. If you don’t feel like initiating a turn, just let the ski find its own way down the mountain.  It’s quite forgiving.  Then, all afternoon in the trees, these skis turned effortlessly while staying afloat thanks to the rocker and the ski width. Rocker in the tails makes “steering with the tails” very natural; whether you want to smear turns or carve turns, these skis allow for either style.

Who should buy this ski? Lot’s of people, for sure. But I should disclose my bias first. I prefer skis handmade in the USA. Product quality is paramount, of course and it’s always been easy to default to skis made in a big factory in Europe. But now, it’s easy to get handcrafted quality coming from ski-makers in Colorado. Ski shops all over the country stock Icelantic skis.  To be fair, there are other skis with similar dimensions that will also ski wonderfully.  Most of what I liked about these skis comes from the rocker technology but there is a differentiating factor with the Icelantic version of an All-Mountain Rocker/Camber ski: the signature Icelantic sidecut. I really like this design feature.  The sidecut allows you to choose to ski aggressively by driving the tip and initiating a hard turn, or you can “bounce down the mountain” while letting the ski do the work.  It’s quite versatile and really amazing when transitioning between skiing styles such as hard-carving vs. hard-charging.

Buy these skis if you want an all-mountain ski that does everything well.  You’re an expert who wants a ski designed with new technology that can make GS-style turns, ski bumps or groomers and still surf the back bowls on fresh, deep days.  Front-side or back-side, you want a ski to shred the entire mountain.  Or, maybe you’re an intermediate looking to ski hard and ski everything in your quest to become expert. You want a ski to grow into. For an intermediate skier looking to become really good, this ski will flatten the learning curve. It will be much easier to become a great rider on these skis than on traditional skis.   If you want to get really good and do it as quickly as possible, do a lot of lunges and buy these skis.

The only thing I didn’t like about these skis was the part where I had to give them back after four wonderful demo days.