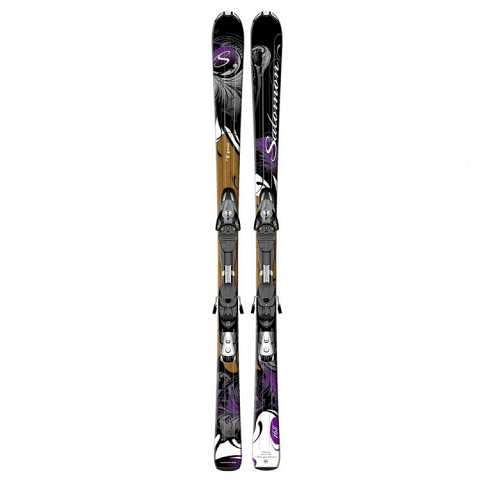 Whether it is long sweeping turns on a stretch of fresh country, skating down the last run of the day, or hitting a powder stash in the trees, the Salomon Origins Topaz skis are ready to take the challenge. The Origins Topaz skis were the only skis we used for the first snowy month of the Colorado ski season and we were not disappointed. Actually, when I went back to my own skis I was a little disappointed to say the least.

The Salomon Origins Topaz skis are a women’s specific ski designed for intermediate skiers. However we felt that even a beginner could benefit from these all mountain skis due to their softness and responsiveness. The Origins feature a sidecut of 120/74/102 for a pair of 160 cms, while they carry a turn radius of 13.6m. The Origins were very responsive to each turn, yet did not require a lot of power or extreme attention to form and technique to stay on edge. We believe this lends itself well to someone looking for a ski to grow with, maybe not learn on, but challenge themselves with.

The composite foam core and elastomer inserts, featured in the Salomon Origins Topz skis work together to diminish vibrations, or chatter.  When skiing down gnarly chopped up runs I did feel some mild chatter. However, no matter what skis I was wearing that day, I think I would have felt some. Despite slight vibrations, I was still able to maintain control and achieve nice tight turns.

When demoing skis, they usually have nice edges and a fresh coat of wax. This was also the case for the pair I tested. However, when it’s time to re-wax your skis, the Origins feature a high tensity P-tex 4000 graphite base that is suppose to absorb wax better than its’ counterparts. I did not re-wax the skis in the 10 plus days I took them out on the mountain and felt that their performance did not waver.

Overall, I was very impressed with the responsiveness and the ability to change terrain without sacrificing my carving ability. The Origins Topaz, when paired with Z10 bindings, were also extremely light weight too: easy to haul to and from the slopes and saves energy when on the mountain. When all is said and done, if you are seeking a powder ski, these are not for you, perhaps check out some of Salomon’s fatter offerings. However, if you are seeking a ski for the other 70% of the season where there isn’t powder, then these skis are worth a test run.

They are available in 152’s or 160’s with a MSRP of $699 with the Z10 bindings included. For more info on the Origins Topaz Ski and other Salomon products, visit www.salomon.com.