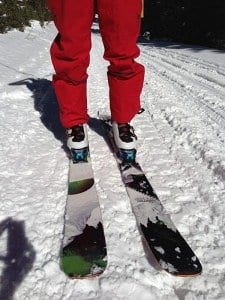 Skiing powder can be a wonderful experience, but skiing powder with powder ski’s can be an amazing experience!  Over the last few months, I’ve had the opportunity to test out the Salomon Rocker2 115 ski’s in varying Colorado ski conditions ranging from glorious early season rock skiing to 2 feet deep powder skiing.  I would have loved to test these ski’s out in waist deep snow, but the snow hasn’t been all that great so far this season, but I still have my fingers, legs, and toes crossed for some good storms.

While the snow hasn’t been all that stellar for much of the ski season in the U.S. , I’ve been able to test the Salomon Rocker 2 115 ski’s in most terrain types you will experience.  This includes thin rocky snow, steep icy slopes, parks, corduroy, dust on crust, tree skiing, bumps, and 6,12, and 24 inches of fresh snow.

The Salomon Rocker2 115 has a full wood core which generally has a longer life than a foam core.  And while a wood core typically last longer, having a foam core makes the ski a little lighter.  For the most part, it depends on how many days you ski and what type of weight of ski you prefer.

In the tip and tail of the Rocker 2 115, there is a honey comb material that is used to lighten up the ski a little and it also prevents vibrations from transferring into the tip and tail from the core of the ski.  This also helps you to be a little more nimble on the mountain when turning with less weight on the ends of the ski’s makes it a little easier to turn if you are making sharp turns, say in the bumps.  This feature is something that Salomon is going to be putting into more of it’s Freeski line in the future from what I have seen of the 2013/2014 skis.  While testing these ski’s, I found the ski to turn very well in powder, but I found they were a little harder for me to turn in sharp bumps.  Please be advised, I’m not a bump lover and I was testing out a pair of 188’s when I normally ski 178’s.

Speaking of tips and tails, there are no metal edges on the tip and tail of the Salomon Rocker2 115.  This helps you if you’re in deeper snow and want to do a little more floating while not allowing the tip or tail to get snagged up on an edge.  Through the core of the ski, you get a thicker metal edge that allows the ski to take more of an impact and also dampens vibrations. 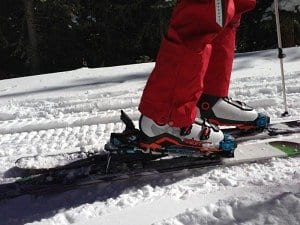 The Salomon Rocker2 115 has twin rocker meaning you get both rocker in the tip and rocker in the tail.  The rocker, or early rise helps the ski stay on top of the deep snow and allows you to get a smooth turn.  By having an early rise in the tip, the front of the ski floats very well and is super playful in the deep snow.   By rocker in the tail, the ski is a little easier to turn in deep snow by having less surface contact which allows for less resistance.  Having an early rise in the Rocker2 115, this ski ski’s a little shorter than what the length says on paper.  So if you are in between lengths, it might be good to go bigger depending on what you plan to use this ski for.

In the powder, the ski did very well.  I tested out the 188’s and I was able to stay on top of the snow the whole time.  With the twin rocker, I felt turning in the deep stuff was super easy.  On icy conditions, I found it was more challenging to get good cuts on the mountain.  Two things that I attribute this to is the ski being wide underfoot and the early rise means a little less on the edge snow.  In the bumps, I found the ski’s to be a little heavy to make quick confident turns, but if you’re a good bump skier, you can probably get through the bumps a little smoother than me.  Groomed runs, the ski’s did a great job.  This is similar with most ski’s out there though. For wider trees, I found tree skiing to be a blast.  For tight trees, I had to slow down a little, but if I had tested out a 178 length I would probably be a little more comfortable.

Overall, I found the Salomon Rocker2 115’s to be an excellent powder ski for those that ski deep snow most of the year.  If you’re looking for a do everything ski, I suggest sizing down a little on ski size with something like a 105 underfoot ski.