If you want a flexible very responsive snowboard then look no further, it has arrived. I must admit that I had some issues with trying the Venture Zelix Snowboard, because I couldn’t find an adaptor that fit the 4 scree hole system that is on the board.  Hence, I wasted part of the ski season by not having the right one. However, I was lucky to have gotten the screw hole adaptor before the season was over and man was I ever glad I did! This snowboard, made in Silverton, Colorado is great!

From the look side of things, I liked it. It’s somewhat graphically simple, which is good by me because most of the time it’s buried in snow if I’m using it the way it was designed! My 5’ 10” frame was perfect for the 158cm board I ordered. 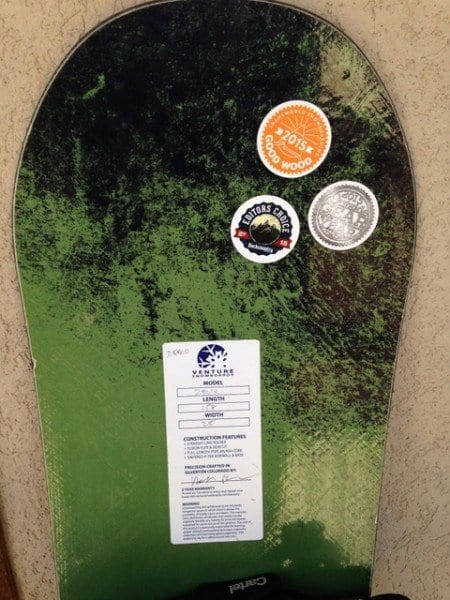 Close Up of Venture Zelix Snowboard with Awards

The board felt light, even lighter than my old trusty I’ve been wearing out for the last 8+ seasons here in Colorado. Lightness is a big deal in my world because of my riding style. It’s one thing to have a beast of a board but if you’re throwing it around all day like I do, you are going to appreciate that feature! I was very eager to try this out and I honestly had nothing negative to say about the board while I was playing with it. 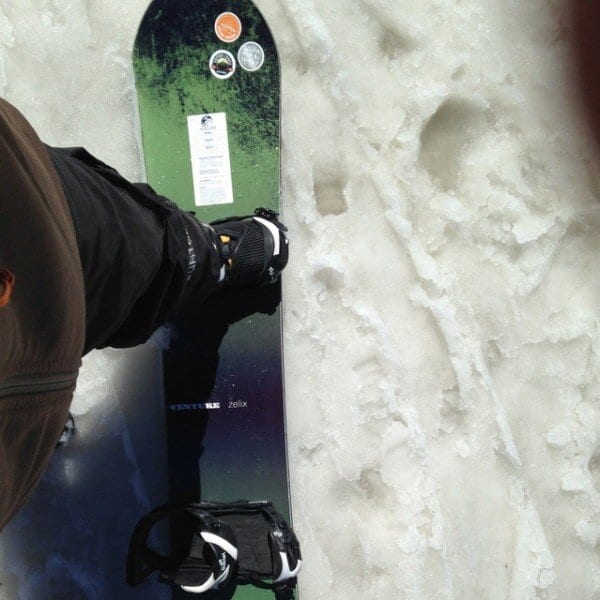 Performance of the Venture Snowboard

Flexible, Flexible, Flexible! Remember these descriptions when thinking about purchasing this gem because it is extremely flexible. Not only does it bend length wise quite far, but I noticed while strapped in that when I twisted my feet (right foot with toe pressed down and left foot with heel pressed down) it created a twist on the board, which is something I have never seen in a board before. Again, flexible as all get out! 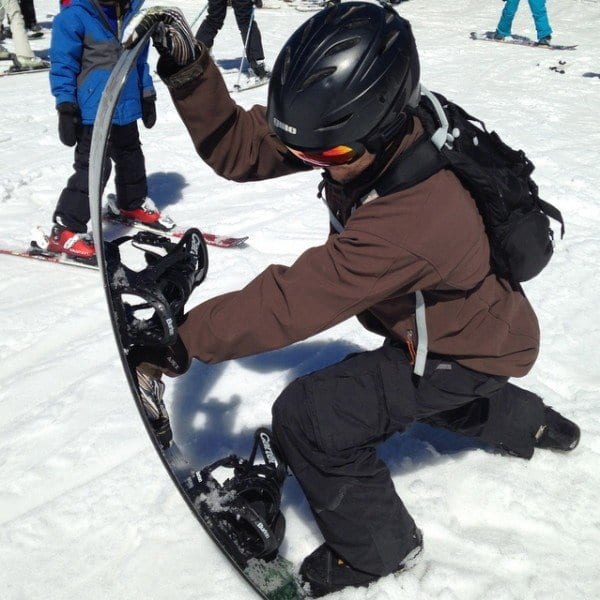 Venture Zelix Snowboard All Flexed Out

I rode the Venture snowboard on a warm Spring day, which usually means there will be a lot of jumping and experimenting with tricks such as front and rear wheelies, little 180’s, and just big pop offs from cat walks and moguls. I’m not a park guy anymore so I couldn’t report on how it handled in that arena unfortunately, but as easy as it is to whip this board around, I can only imagine the potential. It’s aspen wood core really tells the story on why the lightness and flexibility. They claim it shaves off a 1/2 pound of weight and they also use Poplar and Ash for stringers down the board that give it that flex. 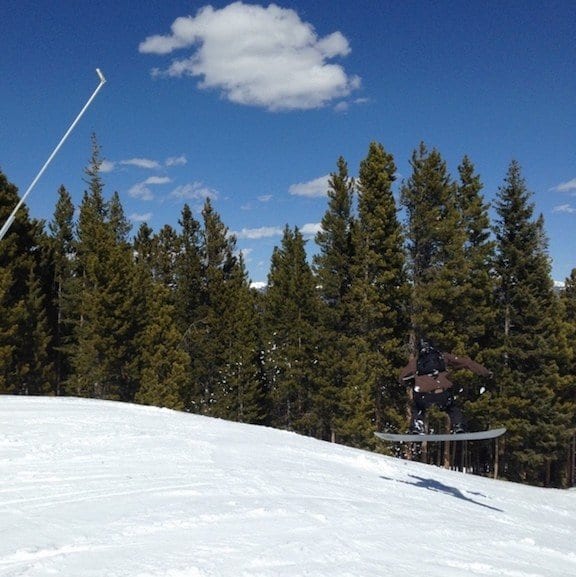 The pop on this board is amazing!

Performance of the Venture Zelix Snowboard:

Nothing but awesomeness! This board really has it all for an aggressive rider that likes to flip around, and make a really fun playful day on the slopes. My day at Breckenridge on a 50-degree spring day was epic. Not that the weather made it epic, but this board. My normal board is a bit older and has an aluminum honeycomb core and is quite stiff. I used to think it was fairly flexible but I have to re-look at this now that I have gotten my paws on this Venture Snowboard!

I found myself having issues with front wheelies where you turn around and face uphill while riding on the front. This was because with my other stiffer board, I have to really push into it to get up on the front but the Venture board required very little effort to accomplish this. It will take a bit of time to get used to this feature but I’m confident I will own this board one day! The demo board did have some dings on the bottom with a nice smattering of P-Tex but it still performed very well. I would also need to ensure that because of the materials used on the board are so light; I want to see how the bottom holds up. With the looks of all that P-Tex I wondered if it would be best to only ride this one mid season to ensure that you don’t hit rocks or twigs/trees buried sometimes in early season riding. Just a minor thought on an otherwise great ride!

With the lightness of the board combined with a flexible responsive board, the equipment is taken care of, the rest is up to you because you should have no trouble pushing this gem around on the slopes in any condition!

Specifics of the Venture Zelix Snowboard:

A very sweet ride for any boarder out there. Responsive and lightweight are the call of the day, so definitely take a look at Venture for your next snowboard. They are located in the heart of the Rocky Mountains with a smattering of resort and backcountry access out their backdoor for their testing playground. You won’t be disappointed.

Priced at $595 for the solid version

I am an active guy who has lived and traveled all over the globe. Things I do or have done that keep me alive include: Ultra Marathons, snowboarding, mountain biking, international nonprofit work, bungee jumping, sky diving, rock climbing, and my love for my dogs and family. I drink craft beer, eat well, exercise, and love my God.