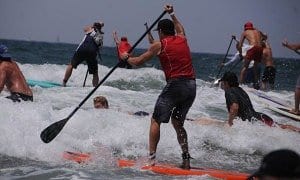 SUP’ing has taken off like wildfire, and not just on the coasts. Lakes and rivers are seeing SUP’ers on a regular basis now. For those that are looking into starting SUP’ing, the choice of boards is dizzying. The first thing to consider is what type of water you’ll be on, ocean, lake or river, and what you’ll be doing, surfing, cruising, racing. Once you’ve figured out that matrix you can narrow down your options. For those in the ocean or lakes that want something they can cruise on, cover some ground quickly and possibly race, the Switchblade from C4 Waterman is a good option. A type of hybrid board, it aims to give you the best of both speed and stability without sacrificing on either.

At 12’6″, the Switchblade looks like a race board, but it also has built in stability for a novice. At 28″ wide, there is inherent stability in it’s width. Many race inspired boards are 27″ wide or under, and while they are faster through the water, they are also very tippy. With the Switchblade’s extra inch of width, the stability is greatly increased. And while it will slow you a little, it will keep you out of the drink. While the rails are five and a half inches thick, the platform is recessed, so you won’t bob on top of the water. Instead you sit just above the water, keeping your center of gravity lower, so that every little wave or chop doesn’t bump you around. Having raised rails also helps you keep track of where you are on the board, and adds a leverage point. When moving my feet around I could feel the rails and know that my feet were at the edge of the board. Without raised rails you can (and I have) moved my foot almost entirely off the board. The rails also provide a leverage point in choppy conditions. You can use your foot to push the rail down if need be, making you more stable. The board has a bit more initial tip than a more cruiser-friendly board (often in the 30″ width range), but it is easy to catch and correct with minor adjustments. If you are ready to progress from a beginner-style board and want to go as fast as you can while still having the stability to take on less than ideal conditions, the Switchblade is a good option.

In addition to it’s stability, the Switchblade has impressive glide. The glide of a board is basically how efficiently it moves through the water; the more glide, the more water you cover with each stroke. Paddling through the Ventura Harbor, I felt incredibly efficient. In smooth water, like the harbor or a lake, this board will cover some serious ground. The Switchblade pushes the water to the side, keeping the water undisturbed around the bow. The bottom is V shaped to keep the water underneath moving quickly. The single fin box is standard for this type of board, and the Switchblade comes with a 10″ fin. My demo board came without the standard fin, but the 10″ Bark fin I used gave the Switchblade a good bite for turning.

With 256L of volume it can support riders up to 250lb. For me at 165lb. I found myself just slightly above the water and in a good stance to remain stable. Steering the 12’6″ board is a bit cumbersome, as all longer boards are, but stepping back in a surf stance to raise the bow, you can easily pivot the board around. Using front end steering strokes the board turns in a controlled arc.

Adding to it’s adventure qualities are the five lash points on the deck. There are four in a square at the front of the board and another near your feet. For long cruises or training sessions, this allows you to lash a dry bag or net rigging so you can carry some extra gear. This is essential on long hauls where water and extra clothing are always needed. For the SUP’er that doesn’t want to race but wants to explore as much as possible, this is a key feature. Another small point that made me happy was the soft deck padding. Simple, vertical channels allow the water to drain while giving my feet a comfortable perch for long hauls. This can not be underestimated because, like in all sports, if your feet aren’t happy, you’re not happy.

I used the Switchblade for the Paddle the Pier race in Santa Monica, Calif., a five and a half mile race at the Santa Monica pier. The swell and wind created some good cross-chop, making it a difficult course to race on. Many racers were out on narrower, more race inspired boards, but I made no bones about being a novice at my first race and was thankful to have the Switchblade. Getting through the waves was tricky, timing and luck have a lot to do with it, but it was more pilot inexperience than the board that slowed me down. The extra stability allowed me to keep paddling while others around me fell into the water. Many times I thought I nearly tipped over, but the taller rails allowed me to counter balance and keep upright. When I did get some clear water the Switchblade 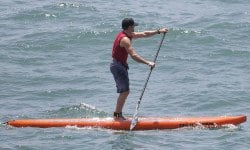 rewarded every hard stroke by gliding through the water effortlessly.