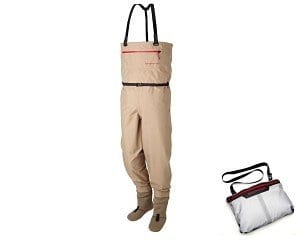 It’s hard to live in Colorado and not get into fly fishing. Trust me on this one. One of the best things about living in Colorado is the ability to experience just about every major outdoor sport possible. Another great thing about outdoor activities in Colorado is that eventually, they tend to blend together. Love camping? Try it out during the winter (near your favorite terrain) and boom! Untouched powder. This is much the way I got into fly fishing – I simply began bringing a fly rod along on all my outdoor excursions. Now, I’ll always have the Redington Sonic-Pro Ultra Packable Wader with me. The rest, as they say, is history.

The folks over at Redington have a long, long history in the sport. One of my favorite attributes about Redington is this, combined with the fact that they welcome new-comers to the sport. One look at Redington’s Website, and you’ll find sections for not only the most experienced angler, but newbies such as myself. Yes, after my third year of fishing I’m still a newbie. But even being a newbie you learn to tell quality from junk – trust me, one fishing trip in the Redington Sonic-Pro Ultra Packable Wader and you’ll know what I’m talking about. 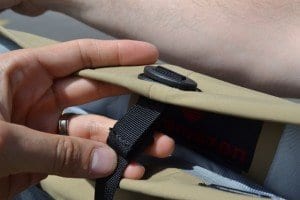 Quality shows in the small details such as removable, reinforced gussets for the shoulder straps on the Redington Sonic-Pro Ultra Packable Wader.

To begin with, I like fishing by myself, or with a like-minded buddy. And to do this in Colorado, you gotta hike. Really hike. Prior to testing the Redington Sonic-Pro Ultra Packable Wader out, my waders took up most of the room in my bag (none other than a product from the fine folks over at Fishpond, reviewed here), and made it so that I had little room for much else. They were heavy, cumbersome, and really pretty much not worth the effort. Every year as soon as the weather would warm up, I would resort to wet wading in order to save the room in my pack for other essentials.

The Redington Sonic-Pro Ultra Packable Wader completely resolved this issue, as they pack down to roughly the size of a nalgene. If that doesn’t work for you, think large can of beans.

Despite my newbie status, I’ve actually fished in a fair amount of waders. This was largely because I borrowed them from multiple friends in my first season, used the heavy rubber booted ones growing up hunting, fishing, and working in South Dakota, and went through no less than three pair in my second year because they were second hand, ripped easily, and I’m fairly hard on my gear. I’ve never used anything quite like this pair of waders. The material on the Redington Sonic-Pro Ultra Packable Wader feels much more like a pair of regular pants than a pair of fishing waders. In fact, I was a bit skeptical when I first received them and tried them on at my house. They felt as if they wouldn’t exactly keep water out. Turns out I shouldn’t have worried, but more on that later. 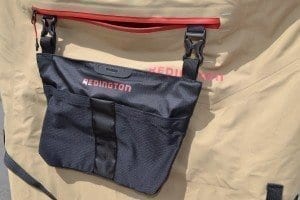 A detachable tool pack is pretty handy to have on the water – you’ll see later that for shorter fishing excursions, I don’t carry a chest pack.

Redington didn’t just think to cut weight, though. As this wader is part of the Sonic-Pro lineup, they stuffed the waders full of new and improved features. I’m a bit of a dork about this stuff, so features such as a removable tool pack really make a product for me, as long as they aren’t gimmicky. Once again, Redington came through with flying colors. Another neat feature is that these pack down into their own front pocket if you don’t want to use the included carrying bag, or want to pack them down even further. I’m also really looking forward to fishing the winter in these, as the generous cut makes them perfect for adding a few base layers when the temp drops. 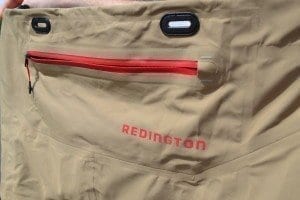 Flip this pocket inside out, and you can pack the waders into for easy carrying. The chest pocket is also taped around the zipper for water resistance.

As you can surmise, my time on the water in the Redington Sonic-Pro Ultra Packable Wader was awesome. I’m not going to regale you with stories about how many fish I caught (okay, I got completely skunked on a few outings this summer – no matter how nice the wader, it doesn’t guarantee a decent catch). I was able to take them hiking half a dozen times, and pack them camping on two overnight trips. My hikes ranged from short (half a mile) to brutal (8 miles is a long way to hike to fly fish). They really are the perfect companion to any fly fisherman’s (or woman – fly fisherperson’s) kit. I especially liked being able to use the belt as a strap to carry them when I camped near my fishing spot. Each time out, they functioned beautifully. As an added bonus, the waterproofing Redington does lets the waders dry super fast. I would take them off stream side, pack up my kit, and by the time I was done, these would be ready to be rolled up and packed away. After one summer, they show no signs of breaking down or fatigue. I particularly enjoy pairing the waders with my favorite fishing shirt, reviewed here. 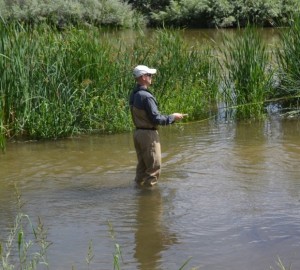 I really liked how the velcro straps securely keep the waders up at chest level. I’m not in deep here, but I’ve been in them up over my midsection.

Overall, I believe the Redington Sonic-Pro Ultra Packable Wader is a great purchase for the money – they retail at $289.95, which is comparable to other waders on the market which offer half of the features. They pack down so small you can’t help but take them with on any fishing excursion, and offer a whole slew of features to boot. The only downside? They only come in one color, so you and all your fishing buddies with just have to put up with matching. Head on over to Redington’s Website to check them out, and pick up a few fishing tips along the way.